Stabilized and Unstabilized Approaches at KSFO

As the investigation of the crash of Asiana Flight 214 proceeds, it’s becoming clear that the aircraft flew an unstabilized final approach into San Francisco International Airport (KSFO). That unstabilized approach by itself did not cause the accident. However, it may have been a contributing factor, as the need to reduce power significantly due to excessive airspeed and altitude on short final masked the fact that the autothrottles had been inadvertently disengaged. By the time the crew realized that the autothrottles were disengaged and airspeed was dropping, it was too late to execute a timely go-around.

So any investigation into the accident is likely to look at airlines policies, as well as de facto practices, regarding unstabilized approaches. In this post, I compare the approaches into KSFO of two airlines (Asiana and United), and show that there are some striking differences in the way that approaches are flown by the two airlines, at least over the time span I looked at. It’s impossible to tell from the data whether those differences result from training, airline policies, degree of compliance with airline polices, or some other factor. Indeed, the data sets are small enough that we probably can’t draw firm statistical evidence. But the data is suggestive enough that I believe the issue warrants further research.

See all my posts on Asiana Flight 214 here.

I looked at all the Asiana Flight 214s and United Flight 852s from mid-May through mid-July of this year. I eliminated from the dataset flights that appeared to have bad data points, such as obviously erroneous positions or altitudes. In addition, I only included approaches that were more or less on a straight-in approach to runway 28R or 28L from 5 miles out, where the final approach courses cross the San Mateo bridge. I also eliminated approaches where the last radar data point was 3 or more miles from the runway touchdown zone. Fortunately, KSFO has very good radar coverage, with many flights having data down all the way down to 100 feet, about a third of a mile from touchdown. The final dataset had 52 Asiana flights, and 55 United flights.

The flights are fairly closely matched. AAR214 and UAL852 land close to the same time each day. Both flight originate in Asia (AAR214 in Korea and UAL852 in Japan) and are nonstop to KSFO. Both airlines fly Boeing 777-200s or 777-200ERs on the route. So the comparison between the approaches should be pretty good.

I should warn you that there is a very small amount of math in this post (this is Flying Professors after all). But bear with us, because there is an important story here.

Let’s begin by looking at the United flights. We’ll start with a plot of altitude vs. distance from the touchdown zone for the runway: 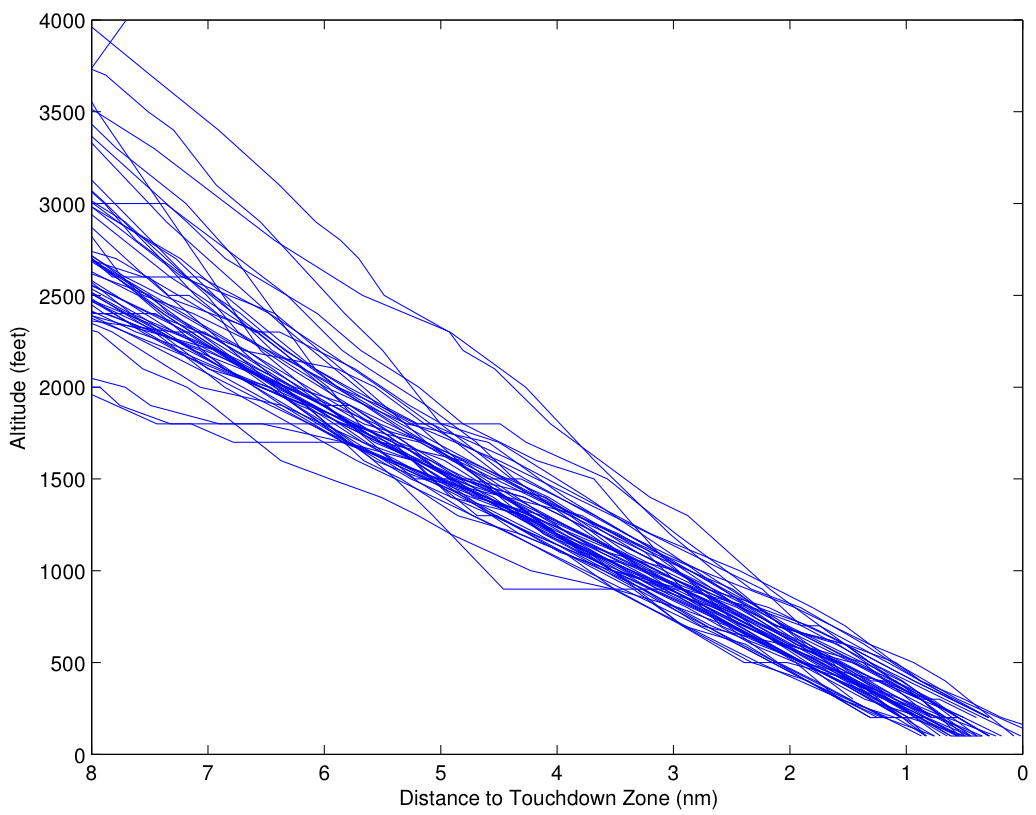 Figure 1. Altitude vs. distance from touchdown zone for United Flight 852.

What you can see is that starting 8 miles out, there is a fairly wide dispersion of altitudes, ranging from 2000 feet to 4000 feet, with a nominal, on-glideslope altitude of about 2500 feet. However, most of the approaches start out within about 200 feet or so of the nominal, with a significant number of outliers, especially on the high side. The slope of most of these outliers is steeper than the nominal 3 deg glideslope, so that the aircraft approaches the nominal glideslope to intercept the glideslope at or before 3 miles out. It’s clear that the pilots (or autopilots) are making concerted efforts to be on glideslope by 3 miles out. Closer in, there is a dispersion of maybe

feet. Most of that dispersion is likely altimetry error, either on the aircraft, or in the correction from pressure altitude to absolute altitude.

(It’s worth noting that it would be great to have the data from the quick access recorders (QARs) on the aircraft. Of course, that’s not publicly available. The altitude data from the QARs could be corrected for field pressure and altitude encoder errors almost perfectly, by noting the indicated altitude once the aircraft has landed, which of course is field altitude. Furthermore, the QAR data has a higher rate than the FlightAware data.)

The groundspeed data tells a similar story. (Of course, we would prefer to have airspeed, but that’s not available from FlightAware.) Here’s the plot for groundspeed: 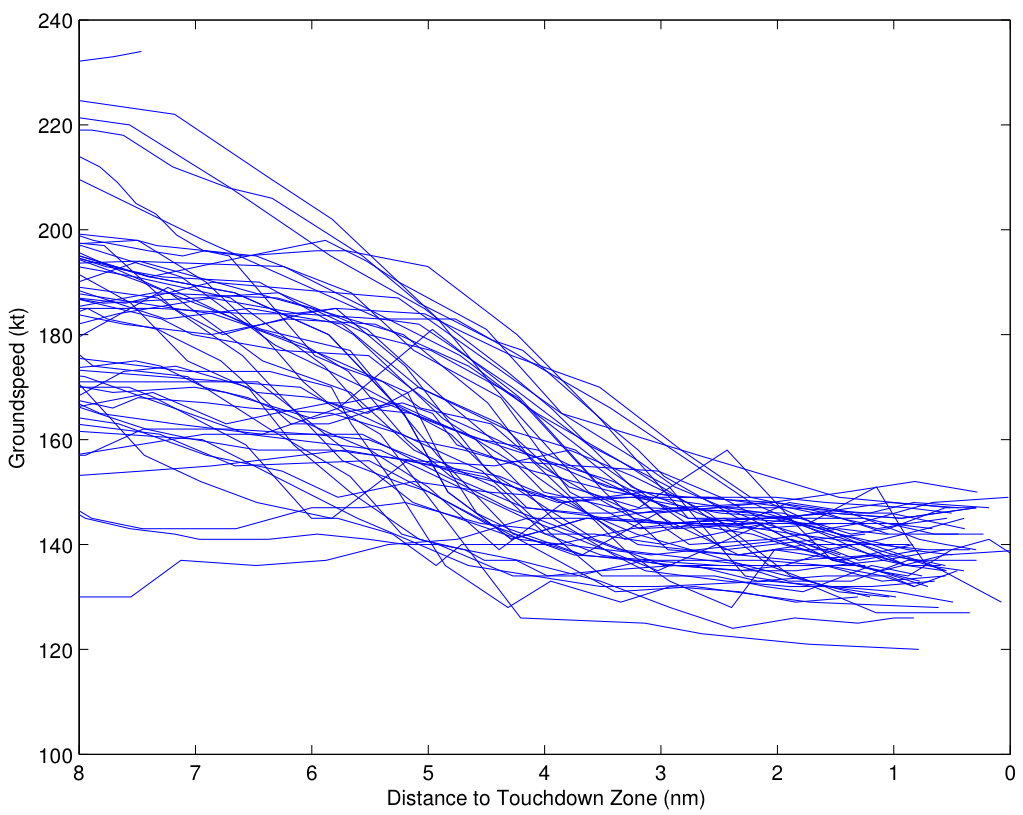 Figure 2. Groundspeed vs. distance from touchdown zone for United Flight 852.

Eight miles out, the airspeeds range from 130 kt to 220 kt. ATC will often restrict the speed of aircraft to control the spacing between aircraft, so this variation is not unusual at all. However, as the approach proceeds, the airspeed needs to approach the target airspeed for the approach. Note here that the average approach 8 miles out is about 180 kt, and begins slowing 6 miles out, reaching about 140 kt by 3 miles out. Again, there is a fairly obvious “funneling” effect here, where the speeds have a wider dispersion early on, and are driven to a narrower dispersion around the desired approach speed by about 3 miles out.

Now let’s look at the Asiana data, paying particular attention to both the similarities and the differences. We’ll start with altitude: 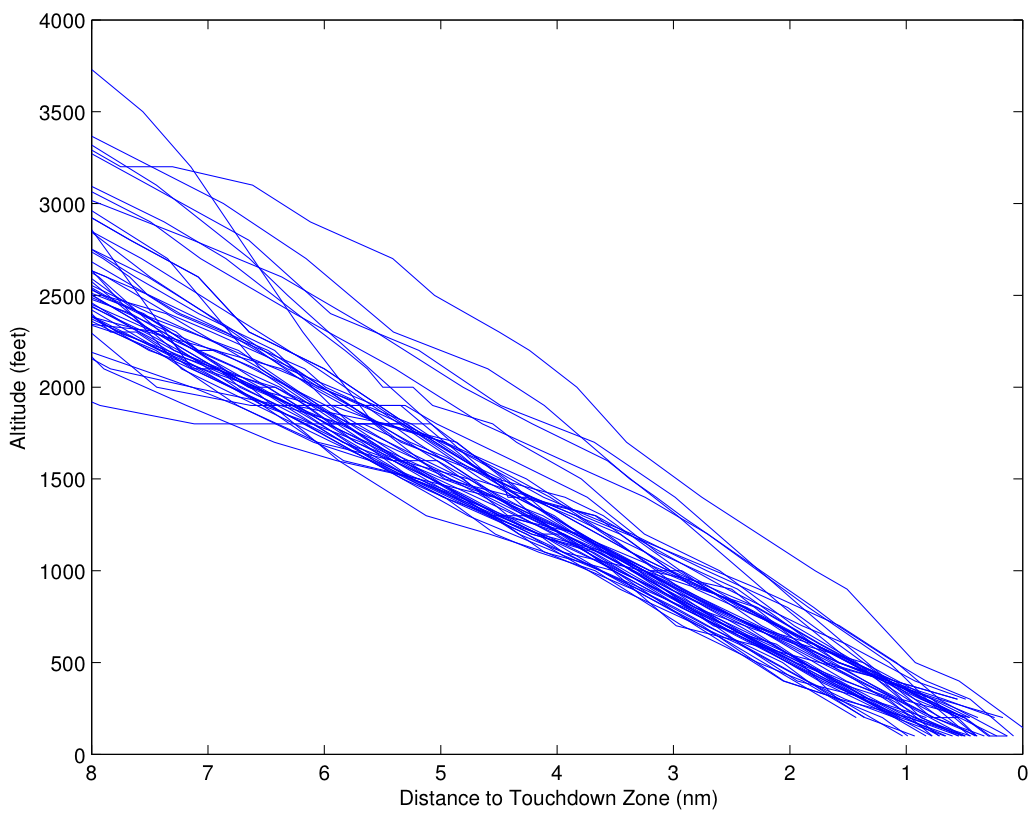 Figure 3. Altitude vs. distance from touchdown zone for Asiana Flight 214.

As was the case for United 852, there is significant dispersion in the initial altitude, which is not unusual. Also as in the United case, the altitudes converge (more or less) to the desired glideslope. However, note that the convergence to the glideslope appears to be less intentional or systematic, with four outlier cases that don’t intercept the glideslope until 2 miles or less out. Indeed, for about a half dozen approaches, it appears that there is no correction at all for being high on glideslope until about 4 miles out.

One sees a similar result with the groundspeed for the Asiana flights: 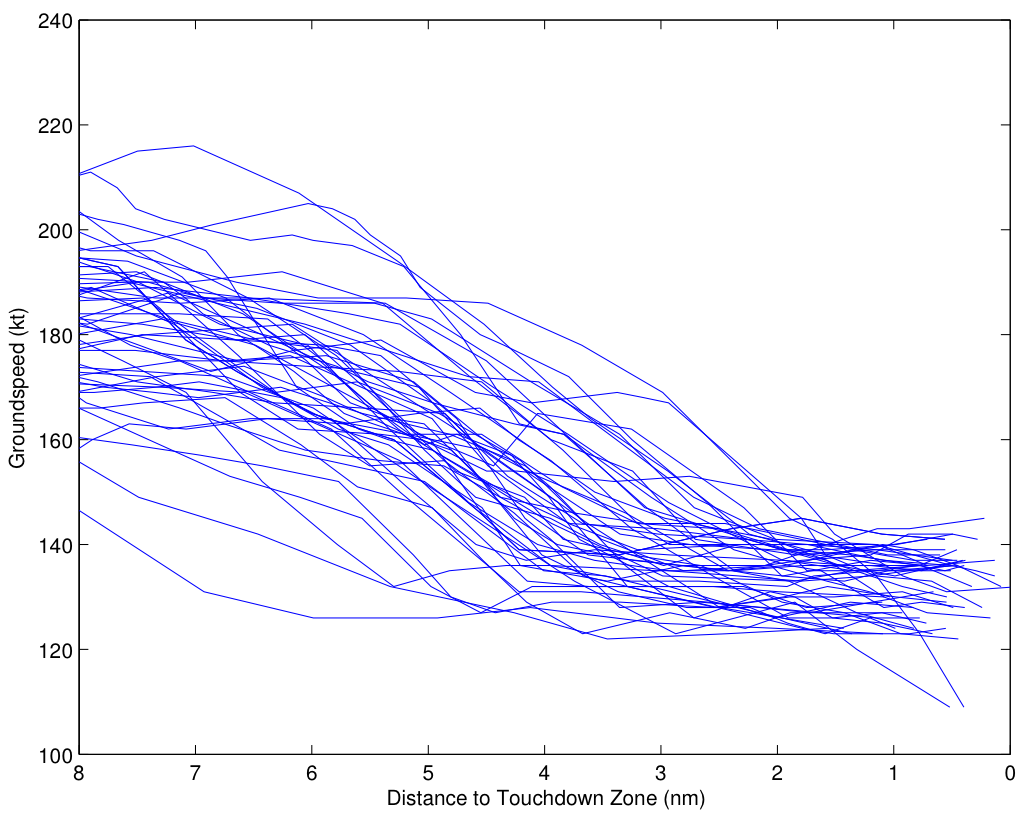 Figure 4. Groundspeed vs. distance from touchdown zone for Asiana Flight 214.

As in the United case, there is a fairly wide dispersion of airspeeds 8 miles out. The dispersion does generally reduce as the distance to the runway narrows, with the airspeeds converged more or less at 2 miles out. Again, though, the corrections appears to come later in the approach, and are apparently less intentional and systematic.

(As an aside, it seems as though it might be possible in both the United approaches and especially the Asiana approaches which are hand flown and which are flown on autopilot, just by the general character of the curves.)

The plots above generally show that Asiana has more high energy, high and fast approaches. To confirm that quantitatively, I’ve plotted the distribution of the energy height at 3 miles out for each approach. The energy height is the total potential plus kinetic energy of the aircraft, normalized by its weight, and is given by [h_E = h + frac{v^2}{2g}] where

is the altitude of the aircraft,

is its velocity (here groundspeed, but more properly airspeed),

is the mass of the aircraft, and

is the acceleration due to gravity.

OK, the last bit of math you need: A distribution is just a plot of values (such as the energy height of a specific flight) on the

axis, vs. the percentile of the data that that value represents on the 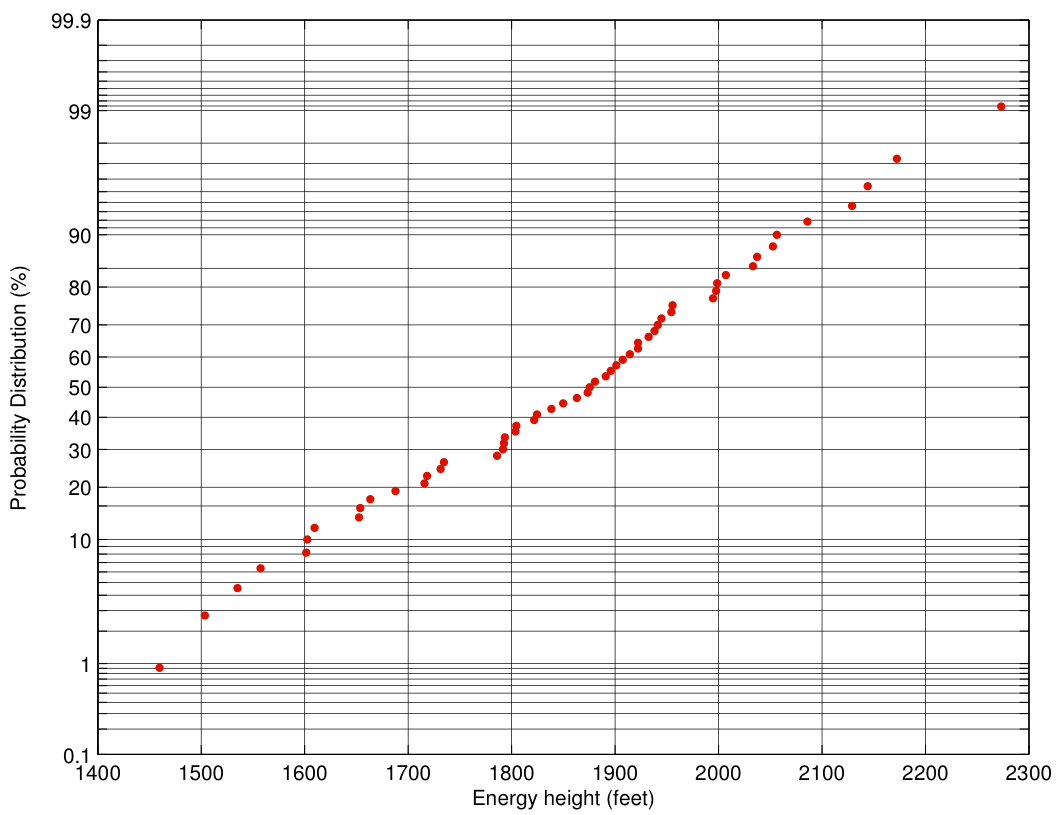 Now let’s look at the distribution for Asiana 214 flights: 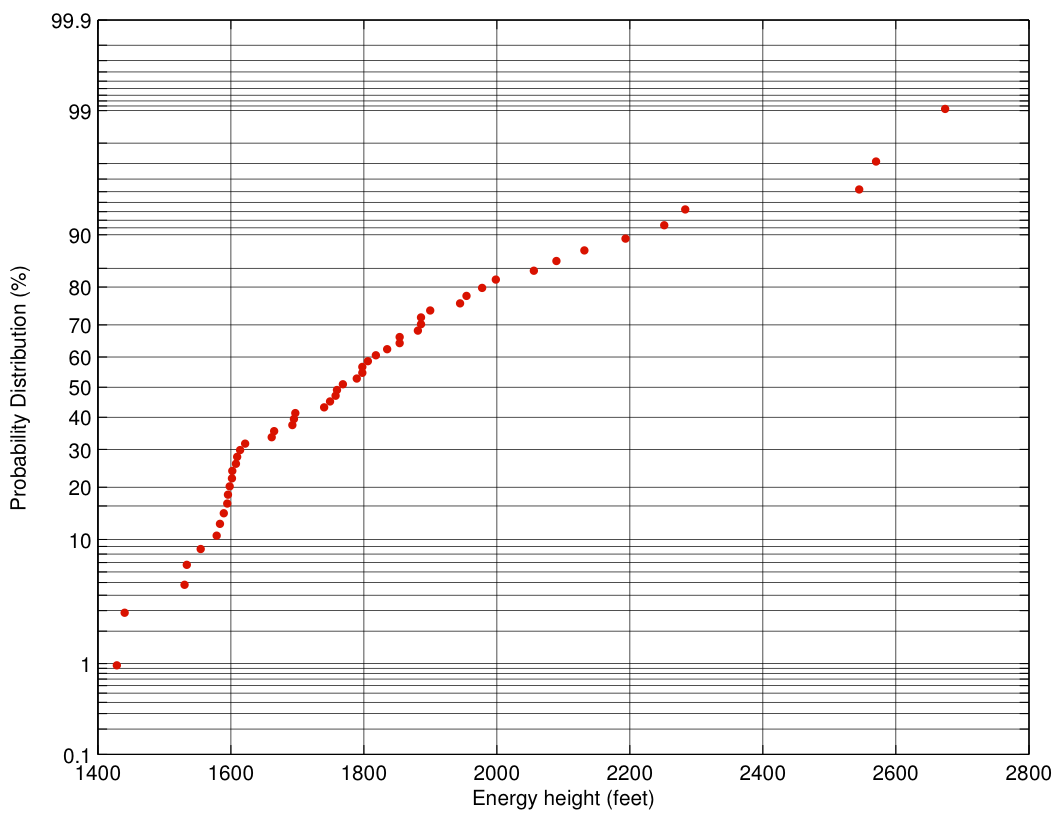 The distribution is decidedly non-Gaussian, which indicates that something interesting is happening here. In particular, note that the distribution on the high energy side is stretched out, with three outliers far to the right. These outliers have the equivalent of 800-1000 feet more energy than the median approach. That’s a lot of excess energy that must be dissipated before landing. In addition, the standard deviation is significantly larger, 277 feet, although the real story is in the outliers.

Yet another way to look at the data is to plot airspeed and altitude for each flight at three miles out on the approach. That plot is below, with blue representing United, and red representing Asiana: 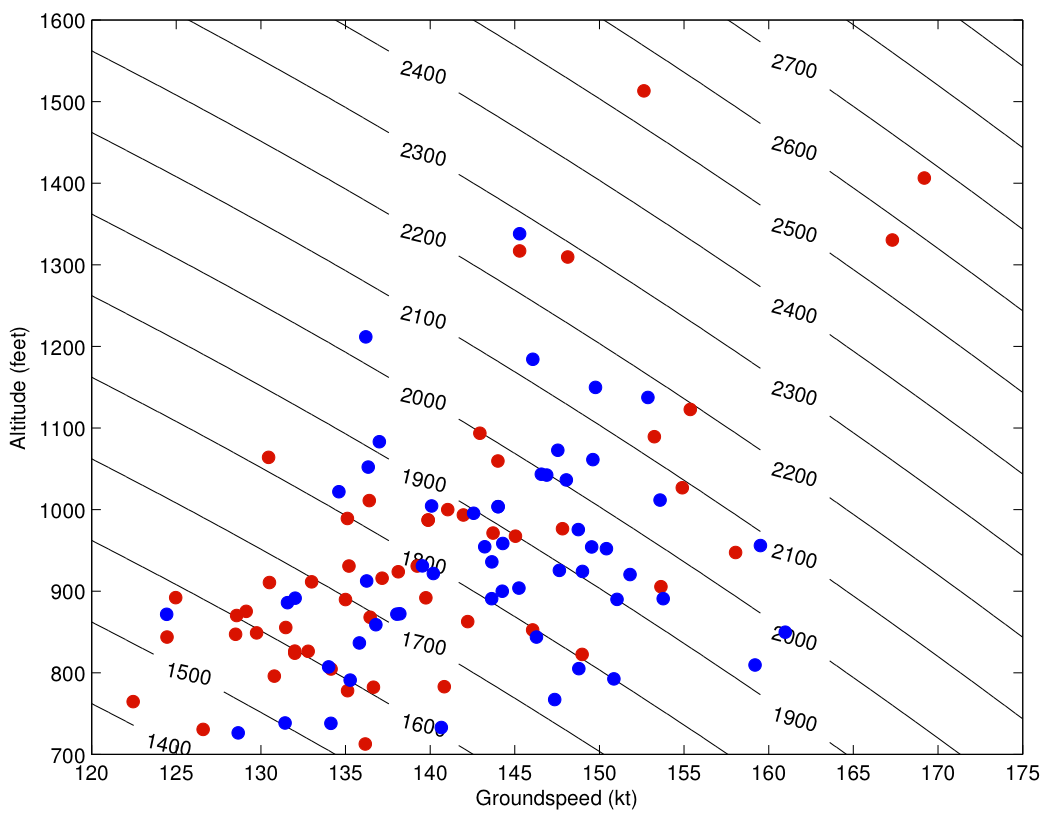 Figure 7. Scatter plot of airspeed and altitude for aircraft 3 nautical miles from touchdown. Blue dotes are United 852, red are Asiana 214.

The black lines are contours of constant energy height, and each contour line represents an additional 100 feet. High energy trajectories are in the upper right corner. The first thing that stands out about the plot is that the three big outliers in energy are all Asiana flights. Not surprisingly, the highest energy outlier is Asiana 214 on the day of the crash. 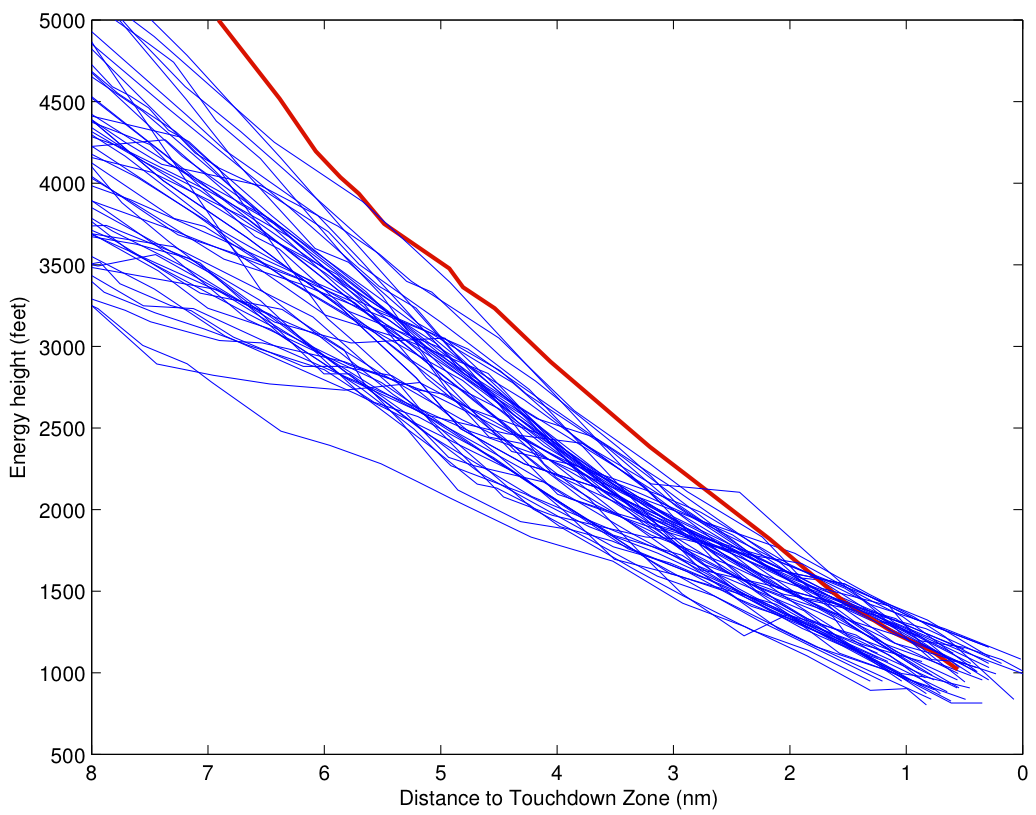 Figure 8. Energy height vs. distance from touchdown zone for United 852.

The red curve is the highest energy approach. At the San Mateo bridge, it’s 500 feet or so above the median approach, a little high, but not excessively. But the slope (rate of decrease of energy) is steep enough to keep the approach at a reasonable energy. By 3 miles out, it’s at 145 kt, close to its target speed, and maybe 250 feet high. It’s flying a slightly steeper approach, but with stabilized airspeed, and tracking in nicely toward the nominal glideslope.

The high-energy Asiana approaches give a completely different impression: 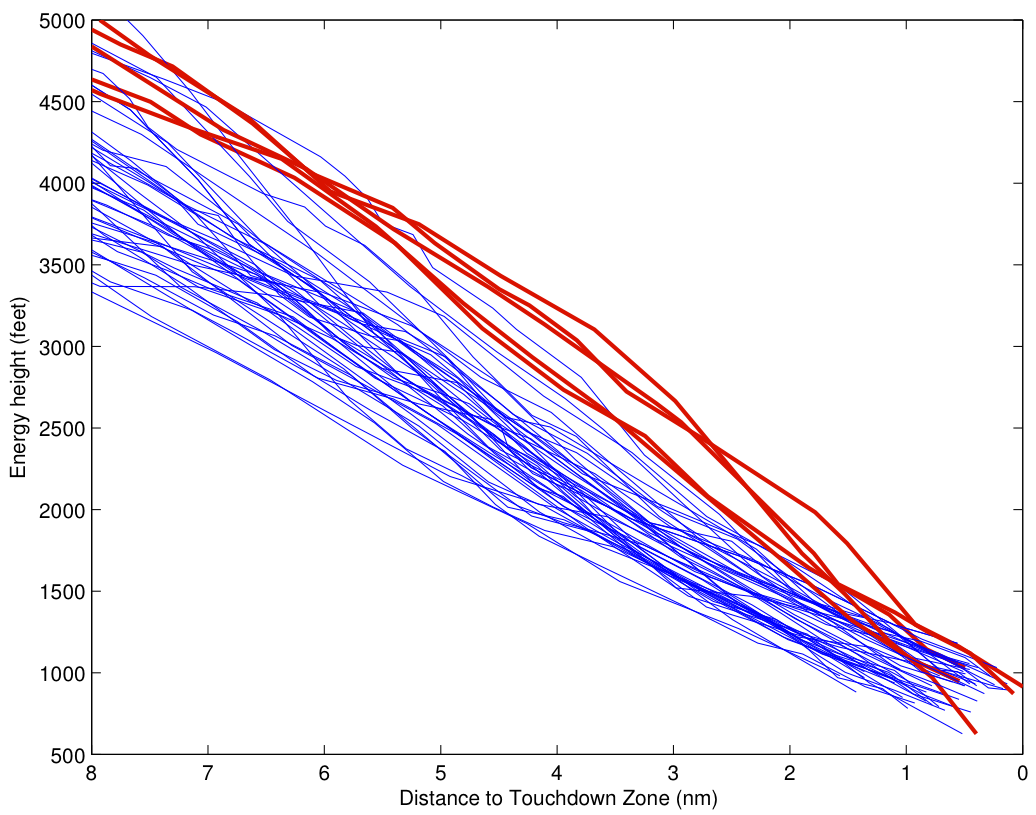 Figure 9. Energy height vs. distance from touchdown zone for Asiana 214.

What are the implications of these data? Although the dataset is not large, it seems possible that there is a structural issue (training, airlines policies, ATC issues, etc.) that is leading to Asiana flying high energy, unstabilized approaches (or failing to go around when they do, since my data doesn’t include cases where flights go around). Of course, it’s impossible to differentiate between, say, a training issue and an airline policy issue by looking at the data here. But if you believe that flying an unstable approach was a contributing factor in the Asiana 214 crash (my tentative opinion is that it was), and the apparent higher rate of unstabilized approaches by Asiana in this limited dataset is real, then there is an important issue that the NTSB and FAA should investigate.

As an aside, there’s been no shortage of cultural explanations for the crash, including assertions that Korean pilots engage in too much rote learning, or that they defer too much to senior pilots because Korean culture emphasizes respect for elders. Please don’t construe this post as supporting that position. Whether there are significant cultural issues (national or corporate) that contributed to the crash can’t possibly be determined from the data presented here. Our focus at Flying Professors is on the math and physics of flying and the joy that that brings (and least to a certain geeky demographic), and we’d like to keep it that way. But please see the article by James Fallows at the Atlantic for a nice discussion about the role of culture in Asiana Flight 214 (and also for some kind words about Flying Professors).

7 Responses to Stabilized and Unstabilized Approaches at KSFO